Various forms of Theatre from India

Bhand Pather : A traditional theatre form  from Kashmir at the foothills of the Himalayas,  The Bhands,were the  traditional performers of the valley. The plays of the Bhands was called Pather; a drama that incorporated mythological legends and contemporary social satire.  Acting,  dance and music were an integral part of this theatre form.

Swang:  Is a popular folk dance drama or folk theatre form from  Rajasthan,  Haryana, Uttar Pradesh, and  Malwa region of Madya Pradesh. Stories from Indian Mythology and folk tales were enacted by a group of actors in the open air theatres surrounded by the audience. Men usually performed in these dramas as women did not tradionally participate in dance dramas.

Nautanki: A popular folk operatic theater performance that  provided entertainment in the villages and towns of northern India.  Nautankis range from mythological and folk tales to stories of contemporary heroes.

Raasleela: Nand Das wrote his plays based  on the life of the Krishna. The performance includes prose, poetry, songs and scenes from the life of Krishna.

Bhavai Maach: The traditional theatre form from Gujarat, it displays a combination of devotion and romantic sentiments.

Tamasha: Traditional folk theatre from Maharashtra. The female actress known as Murki performs all the dances in the play.

Krishnattam: This is the folk theatre from Kerala . Krishnattam is a cycle of eight plays performed during eight days. Based on the life of the Hindu Lord Krishna they portray the victory of good over evil.

Theyyam:  Means God's dance and is a traditional and popular form of  folk theatre from Kerala. It features colorful costumesanad striking head ornaments that are often 6 feet high.

Yakshaganna: Theatre form from Karnataka is based on the Mahabarata, mythological storeis and the puranas.

Theerukoothu: Popular folk theatre from Tamil Nadu in Southern India.  It means 'street play' and is usually performed during the temple festivals to appease the rain goddess Mariamman. This is a cycle of eight plays and describes the life of Draupadi.

From the Center for Cultural Resources and Training, webpages on Theatre forms of India. 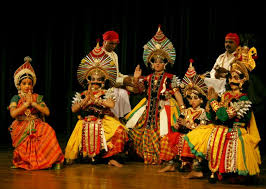