The Margaret M. Perry Memorial Endowment Fund was established on December 28, 1988 by Dr. Richard Perry to "support the development of the collection of materials related to the Magyar-Hungarian people, their history and their culture."

The Margaret M. Perry Memorial Endowment Fund was established on December 28, 1988 by Dr. Richard Perry to "support the development of the collection of materials related to the Magyar-Hungarian people, their history and their culture."  The scope of the collection spans History, Literature, Art, and reference works.  A virtual exhibit and catalog has been created in 2011, and this can be accessed here: https://www.utoledo.edu/library/virtualexhibitions/mppcoll/ but all future development will continue on the Margaret M. Perry Memorial Endowment Collection Libguide. 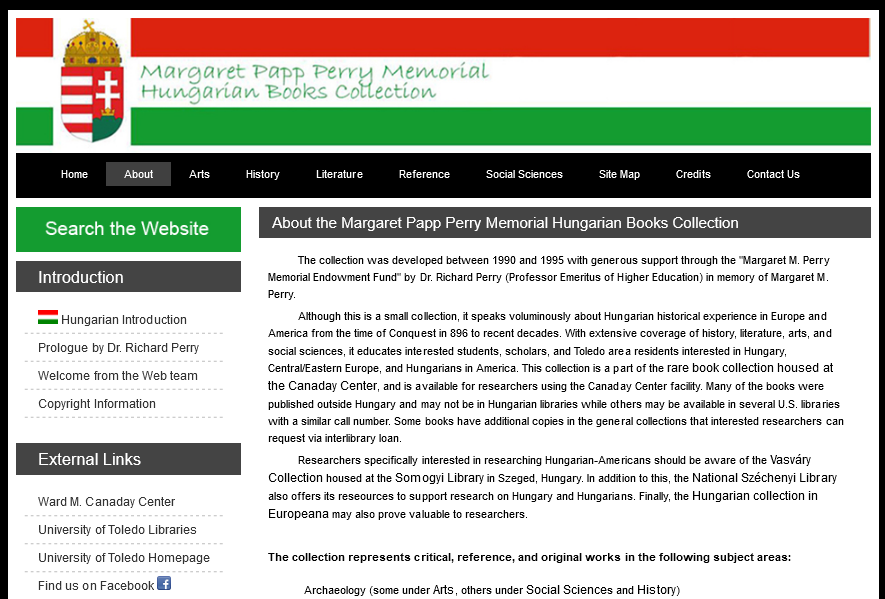 Although this is a small collection, it speaks voluminously about Hungarian historical experience in Europe and America from the time of Conquest in 896 to recent decades. With extensive coverage of history, literature, arts, and social sciences, it educates interested students, scholars, and Toledo area residents interested in Hungary, Central/Eastern Europe, and Hungarians in America. This collection is a part of the rare book collection housed at the Canaday Center, and is available for researchers using the Canaday Center facility. Many of the books were published outside Hungary and may not be in Hungarian libraries while others may be available in several U.S. libraries with a similar call number. Some books have additional copies in the general collections that interested researchers can request via interlibrary loan.

Researchers specifically interested in researching Hungarian-Americans should be aware of the Vasváry Collection housed at the Somogyi Library in Szeged, Hungary. In addition to this, the National Széchenyi Library also offers its resources to support research on Hungary and Hungarians. Finally, the Hungarian collection in Europeana may also prove valuable to researchers.

The Ward M. Canaday Center has housed over 300 work on the various subject areas: